. Since 1986, speaking for those who can't speak for themselves.

Back to PFA Board of Directors

Ann's greatest passion has always been for animal advocacy.  As a charter member of a local non-profit formed to build an animal shelter, she helped with fundraising and served as co-chair of the foster & adoption program.  Eventually feeling a need to shift focus to prevention through spay/neuter, in 1986 she founded People For Animals (PFA).  She continues to serve as its president.  A secondary, founding mission of PFA was advocacy for the county’s animal shelter which led to her 1989 work in authoring the shelter’s first, mandated spay-neuter program.

Other past volunteer service includes United Partnership for Animal Welfare where she chaired the Policy & Legislation committee.  She is currently an active member of  Friends of Williamson County Animal Center and now serves as president of the Board.

Ann lives in Franklin with her husband and three dogs (two from our shelter) and a cat who was homeless and “chose” them. Their son, an important part of their lives, has four rescued cats--her “grand-cats.”

Ann’s passion for benefitting and protecting the lives of animals—individually and collectively-- points to this belief:   When many animals still endure so much, we should focus each hour and dollar on efforts that produce the greatest benefit to the most animals.  She believes that People For Animals accomplishes that through its focus on spay/neuter, where an ounce of prevention is worth a pound of cure.  Spay/neuter:  the ultimate rescue!

Ann with her beloved dogs, 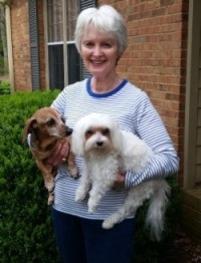 ​Ann Logan began her professional career as a teacher after receiving a B.S in child development at the University of Tennessee in Knoxville.  Other professional responsibilities included working with her husband in his manufacturers’ agency.

Since moving to Franklin in 1979, Ann has been deeply gratified by numerous volunteer opportunities.  She was appointed to the Franklin Planning Commission and served as property chair of the YWCA of Middle Tennessee where she coordinated the renovation of a building for use as a domestic violence shelter.  She was then elected to the YWCA board and was nominated for the Mary Catherine Strobel Volunteer Award given annually in Middle TN for the most outstanding individual volunteer.